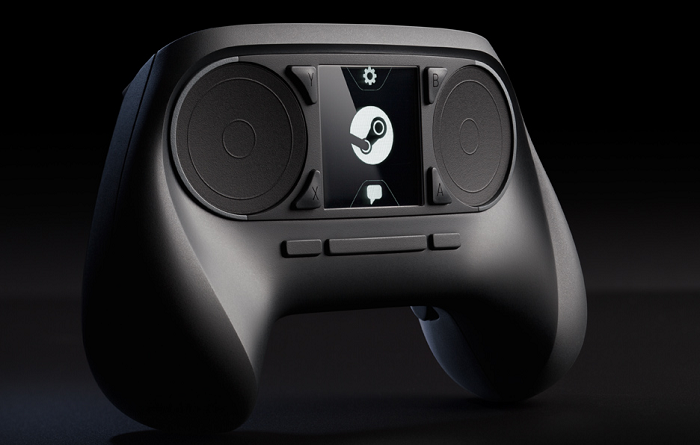 Valve made its third and final announcement regarding the expansion of the Steam Universe earlier today. Stating that, “We realized early on that our goals required a new kind of input technology — one that could bride the gap from the desk to the living room without compromises.” Supposedly, the Steam Controller will work with all games that are available on Steam, including ones that do not feature controller support by “fooling those older games” with the controller’s technology.

“The Steam controller offers a new and, we believe, vastly superior control scheme, all while enabling you to play from the comfort of your sofa. Built with high-precision input technologies and focused on low-latency performance, the Steam controller is just what the living-room ordered.”

The Steam Controller features dual trackpads in lieu of analog sticks, which will also act as buttons. According to Valve, the trackpads provide a “far higher fidelity input” than conventional controllers, adding that PC gamers will likely enjoy the resolution of the gamepad as it is close to that of a desktop mouse. Valve also addressed concerns of  trackpad’s inherent lack of physicality.

“Trackpads, by their nature, are less physical than thumbsticks. By themselves, they are ‘light touch’ devices and don’t offer the kind of visceral feedback that players get from pushing joysticks around.”

To address the issue, the Steam controller will be built with dual linear resonant actuators, with one bound to each trackpad. Valve claims that these “small, strong, weighted electro-magnets” will supply a wider range of feedback. Additionally, the trackpads have a speaker functionality.

The touch screen is another prominent feature on the controller and Valve says that it is being implemented in order to achieve the Steam Controller’s principal goal of making every Steam game playable via gamepad. The touch screen can be used as a type of additional interface for games. When the touch screen is touched its display will be shown on the television screen so the player will not have to divert his or her attention from the game itself. The touch screen will also be a clickable button.

Valve boasted its controllers ease-of-use, stating the controller is comprised of 16 buttons and that 8 of those buttons can be accessed without the thumbs leaving the trackpads. The controller will be symmetrical as well, meaning that left handed and right handed players should have the same level of comfort when using the controller.

“The Steam Controller was designed from the ground up to be hackable.”

Additionally, the Valve has said that they will provide tools to allow Steam users to tweak the controller “from industrial design to electrical engineering.” Valve plans on making the controller’s API available to developers later this year.

The controller does not require a Steam machine and will not be required to play games purchased through Steam. There were no details on price given.

More specifics will be given in the Steam Universe community group.

See all the details here.

What are your thoughts on the Steam Controller? Do you think Valve is on to something? Or are you too disappointed that there wasn’t a Half-Life 3 announcement to care? Tell me in the comments or tweet @gamebloggirl!